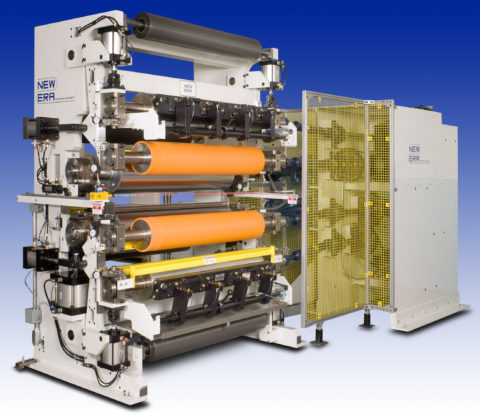 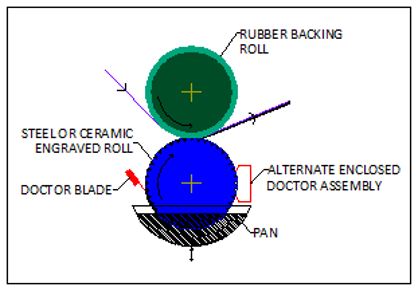 The coating is transferred to the web by the nip force between the rolls. The size and shape of the cells are the primary factor in determining the amount of coating that is delivered to the web. However, other factors such as the rubber thickness and hardness, doctor blade construction, angle and pressure, coating viscosity, web properties and surface and operating speed also affecting the coating laydown. Under a given set of operating parameters the coating application rate of a direct gravure coater is highly repeatable. 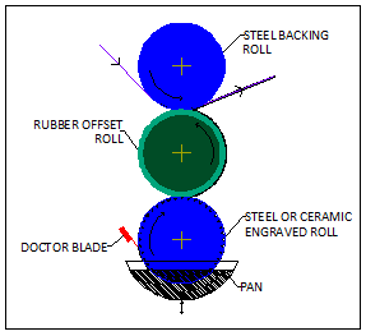 Offset gravure coating is a variant of the previously described gravure coating where an intermediate roll is used to transfer the coating from the gravure roll to the web. This intermediate roll, which is often referred to as an “offset” roll, is rubber covered and is located between the gravure roll and the backing roll, which now features a hard surface such as chrome plated steel, with the web passing through the nip formed between the offset roll and the backing roll. The previously described features and hardware associate with the gravure roll for direct gravure coating still apply. The size and shape of the engraved roll’s cells are the primary way of determining how much coating is delivered to the offset roll, which typically runs at the same speed as the gravure roll, with one roll turning clockwise and the other counter clockwise. The speed ratio of the offset roll to the web as well as their relative direction with respect to each other greatly affects the amount of coating applied to the web. The offset gravure coater has a good speed range, handles a fairly wide viscosity range and is good for changing coating laydown rates.